Home / Journal / WHAT IS THE SCHOOL-TO-PRISON PIPELINE? 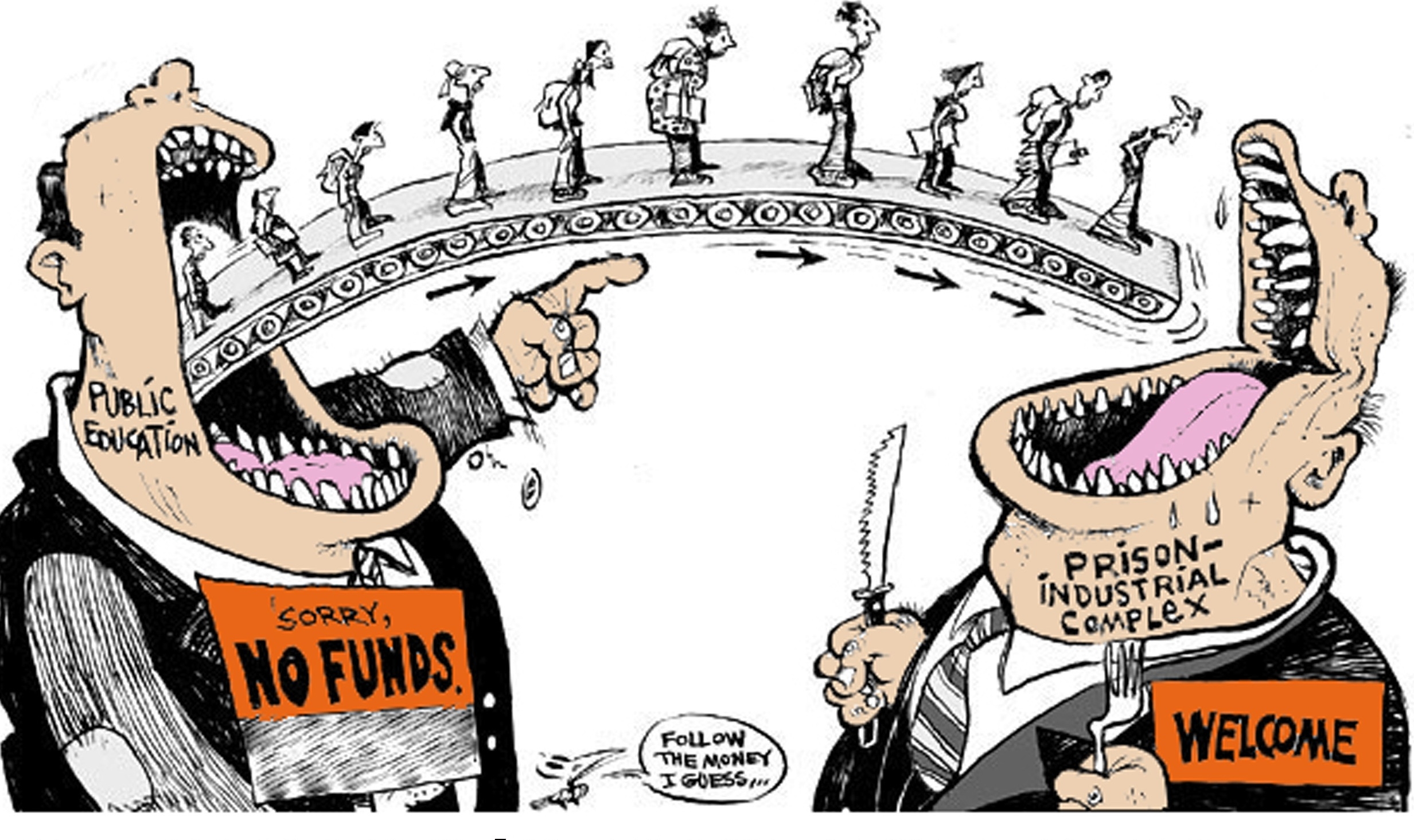 WHAT IS THE SCHOOL-TO-PRISON PIPELINE?

According to the ACLU, The “school-to-prison pipeline” refers to the policies and practices that push our nation’s schoolchildren, especially our most at-risk children, out of classrooms and into the juvenile and criminal justice systems.  This pipeline reflects the prioritization of incarceration over education.  For a growing number of students, the path to incarceration includes the “stops” below.

For most students, the pipeline begins with inadequate resources in public schools. Overcrowded classrooms, a lack of qualified teachers, and insufficient funding for “extras” such as counselors, special edu­cation services, and even textbooks, lock students into second-rate educational environments. This failure to meet educational needs increases disengagement and dropouts, increasing the risk of later court­involvement. (1) Even worse, schools may actually encourage dropouts in response to pressures from test-based accountability regimes such as the No Child Left Behind Act, which create incentives to push out low-performing students to boost overall test scores. (2)

Zero-Tolerance and Other School Discipline

Lacking resources, facing incentives to push out low-performing students, and responding to a handful of highly-publicized school shootings, schools have embraced zero-tolerance policies that automatically impose severe punishment regardless of circumstances. Under these policies, students have beenexpelled for bringing nail clippers or scissors to school. Rates of suspensionhave increased dramatically in recent years—from 1.7 million in 1974 to 3.1 million in 2000 (3) — and have been most dramatic for children of color.

Overly harsh disciplinary policies push students down the pipeline and into the juvenile justice system. Suspended and expelled children are often left unsupervised and without constructive activities; they also can easily fall behind in their coursework, leading to a greater likelihood of disengagement and drop-outs. All of these factors increase the likelihood of court involvement. (4)

As harsh penalties for minor misbehavior become more pervasive, schools increasingly ignore or bypass due process protections for suspensions and expulsions. The lack of due process is particularly acute for students with special needs, who are disproportionately represented in the pipeline despite the heightened protections afforded to them under law.

Many under-resourced schools become pipeline gateways by placing increased reliance on police rather than teachers and administrators to maintain discipline. Growing numbers of districts employ school resource officers to patrol school hallways, often with little or no training in working with youth. As a result, children are far more likely to be subject to school-based arrests—the majority of which are for non-violent offenses, such as disruptive behavior—than they were a generation ago. The rise in school-based arrests, the quick¬est route from the classroom to the jailhouse, most directly exemplifies the criminalization of school children.

In some jurisdictions, students who have been suspended or expelled have no right to an education at all. In others, they are sent to disciplinary alternative schools.

Growing in number across the country, these shadow systems—sometimes run by private, for-profit companies—are immune from educational accountability standards (such as minimum classroom hours and curriculum requirements) and may fail to provide meaningful educational services to the students who need them the most. As a result, struggling students return to their regular schools unprepared, are permanently locked into inferior educational settings, or are funneled through alternative schools into the juvenile justice system.

Youth who become involved in the juvenile justice system are often denied procedural protections in the courts; in one state, up to 80% of court-involved children do not have lawyers. (5) Students who commit minor offenses may end up in secured detention if they violate boilerplate probation conditions prohibiting them from activities like missing school or disobeying teachers.

Students pushed along the pipeline find themselves in juvenile detention facilities, many of which provide few, if any, educational services. Students of color — who are far more likely than their white peers to be suspended, expelled, or arrested for the same kind of conduct at school (6) — and those with disabilities are particularly likely to travel down this pipeline. (7)

Though many students are propelled down the pipeline from school to jail, it is difficult for them to make the journey in reverse. Students who enter the juvenile justice system face many barriers to their re-entry into traditional schools. The vast majority of these students never graduate from high school.